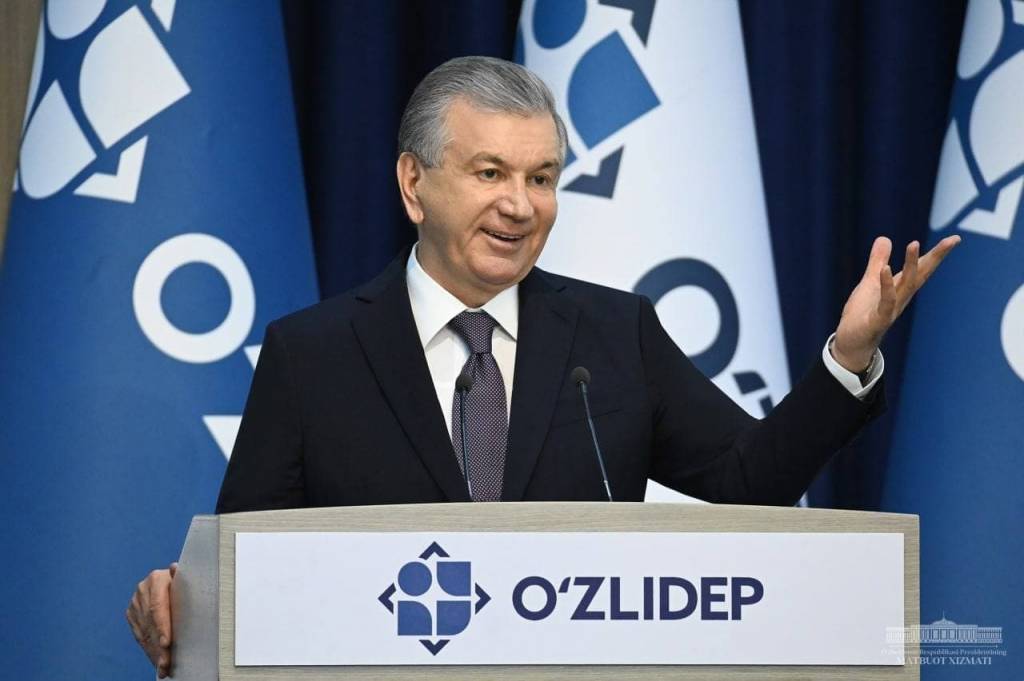 On October 16, the candidate for the President of the Republic of Uzbekistan from the Liberal Democratic Party Shavkat Mirziyoyev met with voters of Tashkent region.

The event was opened by the authorized person of the candidate in Tashkent region R. Turdiboyev. It was noted that in recent years, tangible changes are taking place as a result of close interaction of government agencies with the people and the beginning of practical work in cities and regions, remote villages and mahallas.

Shavkat Mirziyoyev made a presentation on his pre-election program. It reflects the priorities in the economics, entrepreneurship, agriculture, education, healthcare, regional development, public administration, ensuring the rule of law, foreign policy and culture.

The candidate noted that the main goals of the five-year program for Tashkent region are to train 100 thousand young people in modern professions, create at least 450 thousand jobs in all spheres, increase the income of the population at least 2 times and reduce poverty, create decent living conditions in each mahalla.

At the same time, the main attention will be paid to the development of industry, the creation of large enterprises based on natural resources, and manufacturing products in demand.

In the next five years, it is planned to implement 8 thousand large, medium and small investment projects in the region worth $20 billion. This will create over 180,000 permanent jobs.

In particular, a large copper cluster will be organized in Almalyk, Angren and Akhangaran. The cities of Chirchik and Almalyk will be transformed into the center of the innovative chemical industry. The new foundry complex will be launched at Uzbekistan Metallurgical Plant in Bekabad, its capacity will double. Development of 27 million tons of iron ore will begin in Parkent district.

In general, due to new projects in the next five years, the region’s exports may more than double and reach $2.6 billion.

The great potential of Tashkent region in the service sector was noted. Thus, the region is favorable for both summer and winter tourism. Therefore, it is planned to develop a special program for tourism in the region. Thanks to investments of $1 billion in the creation of additional tourist zones in Amirsay, Chimgan, Charvak reservoir and around the Tashkent Sea, 80 thousand jobs can be created in the mountainous areas of Akhangaran and Angren. In Parkent district, 100 billion UZS will be allocated for infrastructure development, a special tax regime for tourism will be introduced.

Projects were also announced for the creation of cargo terminals, agrological complexes and trade zones.

It was emphasized that based on a scientific and innovative approach, the volume of agricultural production will double. More than 30 thousand jobs will be created by leasing land to the population. It is planned to create fruit and vegetable clusters, intensive orchards and vineyards on 20 thousand hectares, plantations of walnut, almond and pistachio on 6 thousand hectares, as well as 45 large livestock complexes.

Shavkat Mirziyoyev noted that the key elements of the principle “for the sake of human interests” are quality education and medicine, and outlined tasks in this direction.

“All our plans, formed today, are aimed at a single goal – the further elevation of the honor and dignity of our people, ensuring a free and prosperous life for every person. In achieving these goals, I rely primarily on our people, selfless and active representatives, the residents of Tashkent region, who have great work and life experience”, Shavkat Mirziyoyev said.

At the meeting, party members, voters gathered in district studios, had a sincere conversation with the candidate. They noted the changes taking place in the region, expressed their opinions and proposals. Shavkat Mirziyoyev supported and promised to implement the proposals made.